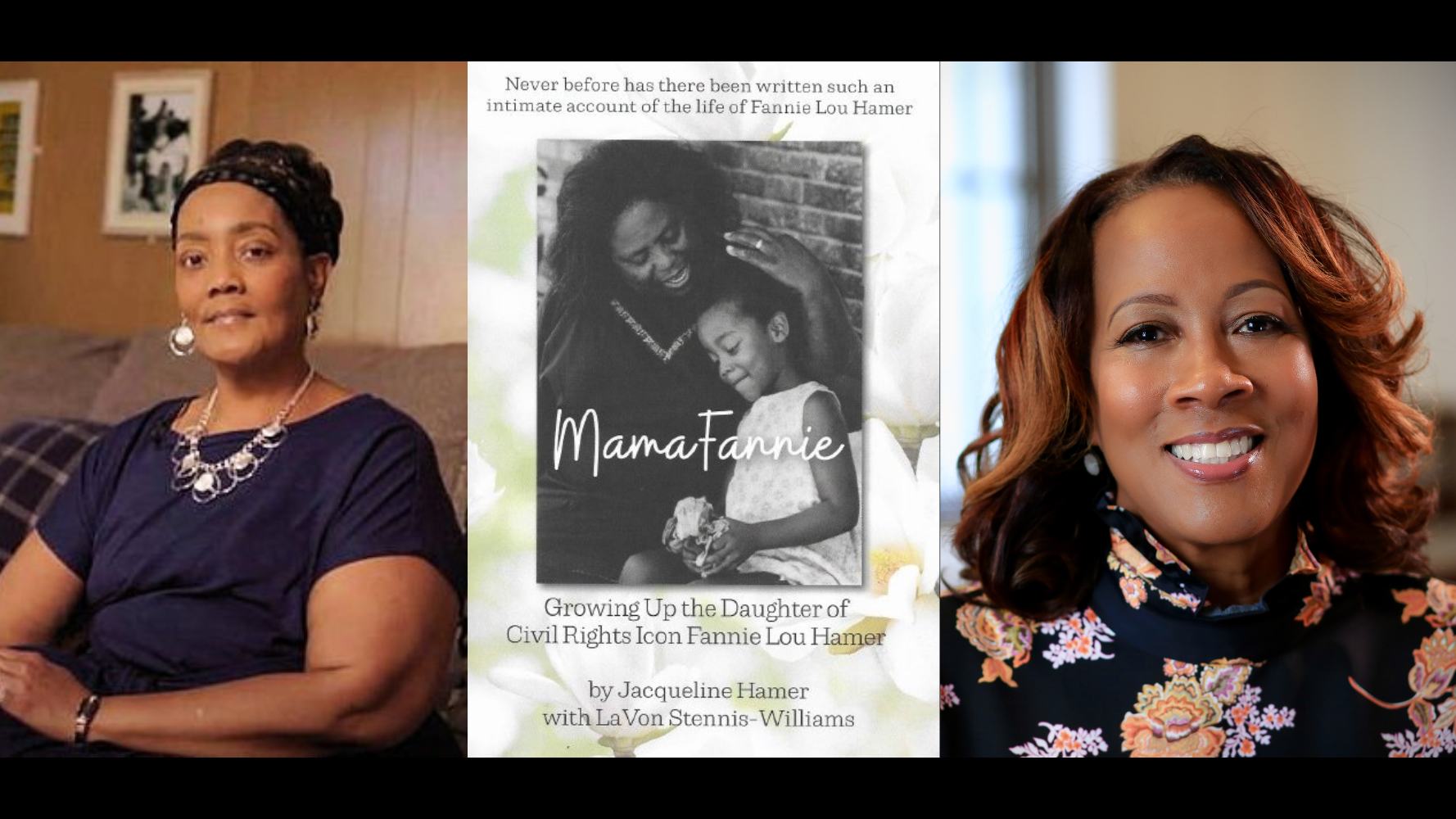 Jacqueline Hamer Flakes makes her City of Asylum debut to share her latest book, Mama Fannie: Growing Up the Daughter of Civil Rights Icon Fannie Lou Hamer, an important contribution to the historical records written about one of the most significant and influential leaders in the 20th century in America. This event is part of the Pittsburgh premiere of FANNIE: The Music and Life of Fannie Lou Hamer happening at the August Wilson African American Cultural Center from January 13–16, 2023. This event is moderated by First Lady of Pittsburgh, Michelle Gainey.

Fannie Lou Hamer rose from poverty and humble beginnings to become one of the most influential voices in the effort to ensure equal rights for Blacks in the South and all across America. She saw wrongs and tried to find solutions to right them. She sought opportunities to lift others up and extended a hand.

Her fearless fortitude and deep love for people provided the drive to fight for voting rights, civil rights, and laws that would provide the American Dream of Life, Liberty, and the Pursuit of Happiness written into the Constitution. Her work took her to the halls of Congress, the Democratic National Convention, and the hearts and homes of so many. She was beaten, arrested, rejected, and violated, yet she rose and stood for what is right for all.

Fannie Lou Hamer—”Mama Fannie”—was also a loving and caring mother to her daughters. She provided a safe and nurturing home and taught her children about fairness, equality, and perseverance regardless of the odds faced in life. These are the same values that her own mother had taught her. Here, her daughter Jacqueline (Cookie) shares her insight into Mama Fannie from a perspective only a daughter can write.

This program is presented with special thanks to B. Marshall and Stop the Violence Pittsburgh.

Born during the latter years of the civil rights movement, Jacqueline Hamer Flakes has seen and heard a lot about justice and racial equality. And growing up as the youngest child of Pap and Fannie Lou Hamer in Ruleville, Mississippi, Jacqueline has seen the best people have to offer by way of their generosity and compassion—and their very worst as they used any means they could to prevent people of color from advancing in society.

By the time Jacqueline was born in September 1966, the iconic Fannie Lou Hamer was already four years into her work as a voting rights advocate having formed the Mississippi Freedom Democratic Party two years earlier in 1964.

Unable to have children of her own after a forced hysterectomy, Fannie Lou and Pap adopted two infant girls, Dorothy Jean and Virgie Ree. Both later became involved in civil rights with Dorothy being arrested years later because of Fannie Lou’s efforts and Virgie singing with her on occasion.

Born to Sylvester and Dorothy Jean Hamer Hall, Jacqueline was just nine months old when her beloved mother passed away at the tender age of 22. Jacqueline and her older sister, Lenora, who was 19 months old at the time, were adopted by the Hamers after Fannie Lou refused to see them go to separate homes.

Jacqueline, nicknamed “Cookie” by her parents, saw firsthand how hard Mama Fannie worked to feed the poorest of the poor in the Mississippi Delta—regardless of color—with her Freedom Farm Cooperative and a few years later at Pig Bank.

After Fannie Lou’s death on March 14, 1977, Jacqueline and Lenora were raised by Pap with the aid of several female relatives within the Ruleville community. Jacqueline graduated from Ruleville High School in 1984 and later attended Mississippi Delta Community College majoring in Clerical Office Management.

A single mother, Jacqueline has two sons, Shadney and Trenton.

Since the death of her beloved sisters, Virgie Ree and Lenora, Jacqueline has picked up the reins in helping others learn about and remember the enduring legacy and sacrifices of her Mama Fannie. Jacqueline has spoken about her mother at several events including: The March on Washington Film Festival; the Women of Color Nebraska Caucus; a marker unveiling in Indianola, MS; a Juneteenth Celebration of Freedom in Holly Springs, MS; a mural unveiling in Jackson, MS; and a book launching at the Mississippi Civil Rights Museum also in Jackson. An honorary member of Youths Against Gang Activities, she has also spoken at two of their events in Indianola and Coldwater, MS.