Identity and Community in the Latinx & Proud! series

One mid-February evening, an audience gathers in City of Asylum’s cozy Word Cellar for the third installment of the Latinx & Proud! series. Staff members squeeze extra chairs behind the back rows to make room for latecomers. Chatter rises to the air like bubbles in pop, as old friends catch up and new friends are introduced.

As the event begins, Karla Lamb, COA’s programming manager, steps to the podium and speaks of her intentions and ambitions for the series, how she sought to draw the very best “Latinx movers and shakers, performers, poets, musicians, and creatives.”

Latinx & Proud!, she says, aims to “recognize the diversity that makes us, as Latinx poets and artists. What makes us beautiful — our histories, our narratives, our languages, our voices.”

Lamb is the architect of the series and is a Latinx writer herself, invested in its wider mission. She and a committee of fellow Latinx writers — Adriana Ramírez, Malcolm Friend, and Eloisa Amezcua — helped orchestrate the readings, which have run since October 2019, with plans to continue through virtual programming in the COVID-19 era.

As a result, audiences have seen a joyous exploration of Latinx voices — their fluidity and power. Again and again, the performers show how Latinx art and the Latinx community defy neat categorization and strict boundaries. The community is varied and vibrant — a whole world containing countless other worlds.

Up on the stage, the performers share their writing in Spanish, in English, in Spanglish — their voices rise through sound, through verse, through prose. Performers arrive from all corners of America — from New York, Miami, L.A., Houston, Chicago — and from the city of Pittsburgh itself. They trace their roots to countries across Latin America — Venezuela, Puerto Rico, Brazil, the Dominican Republic, Columbia, and Mexico, just to name a few. They identify as black, white, brown, or mixed. It’s a group of performers diverse in their geography, gender, genre, and experience — yet Latinx, all the same.

Lamb says that the seeds for Latinx & Proud! began to germinate in mid-2019 when she found herself thinking about representation, marginalization, and how her own identity appeared in her work.

Lamb was born in Mexico, then raised in California, then in Michigan, before finally arriving in Pittsburgh seven years ago. Here, she struggled to find a Latinx community where she felt at home. Before coming up with the idea for the series, she realized there were no venues or organizations engaging with Pittsburgh’s creative Latinx community.

At the same time, she recalls missing her own family. “I wanted to speak Spanish and I was losing my Spanish,” she says. “Out of nowhere, I started to realize that a lot of my friends actually speak Spanish.”

And so with the help of the City of Asylum staff, she has decided to see what it might look like to build the community she was looking for.

In mid-February, prior to her performance, the poet Analicia Sotelo turns to Lamb and says, “You must be a talent scout or something.” And that’s part of it. Months of research and collaboration between Lamb, the COA staff, and the board committee went into finding the right mix of local and national artists, writers, and musicians.

The series is designed to be inclusive of other languages, such as Spanish. Board member and poet Malcolm Friend describes the importance of being considerate toward people who have recently arrived in the U.S. or those more comfortable in a language other than English — and, moreover, how artists shouldn’t need to sacrifice that language to reach an audience.

All the artists who have come to the Alphabet City stage seem to share a common empathy for the marginalized — not just in the Latinx community, but in communities throughout the U.S. and the world. This empathy, expressed through art, is a kind of activism, which was a factor the board considered while deciding which artists to approach. They looked not only for craft, Lamb says, but people who are making strides in activism and literary circles in terms of discussing identity.

At the same time, many performers doubted their place in the series, wondering if they were “Latinx enough.”

Diannely Antigua, who performed in the January installment of the series, spoke with Sampsonia Way after her performance and said that throughout her journey as a poet, she has struggled with representing her latinidad — a term which describes the particular culture and experiences shared by members of the Latinx community across races and nationalities.

For Antigua, her latinidad is a vital, but not exclusive part of her identity. At the same time, though, she says, “My poetry is Latinx because a Latinx person wrote them.”

One Journey, Among Many

Moníca A. Jiménez, hailing from Puerto Rico and then Houston, doesn’t usually compose poetry in Spanish and doesn’t speak it with most friends and colleagues. But for her performance at COA, she is generous and comfortable enough to perform in her first language.

Spanish, she says, is the language she associates with family — and the language she dreams in. Her partner doesn’t speak Spanish fluently, but she says that when they visit her family in Puerto Rico, he notices the difference. “When you speak in Spanish,” he has told her, “you are a different person.”

In the summer after Jiménez’s junior year as a classics major at Yale, she prepared to travel to Italy for an archaeological dig. But first — a routine summer vacation to Puerto Rico, where her extended family lived and where she had lived for several years before moving to Houston.

Each year of her childhood, she begged her parents for a trip back to the island. It was a refuge away from the bullies in Houston who didn’t understand her, mixed-race and Puerto Rican — in that strange place between American and not, given the long, complicated history of colonization on the island. During those summers in Puerto Rico, Jiménez recalled feeling free and at home — it was the place she felt most herself, where she felt she could be her “full everything.”

That summer, right before her trip to Italy, she was back in Puerto Rico for a family wedding. A small hurricane had passed through six months before, and as she drove through the mountains with her cousin, they came across a washed-out road.

“We’re essentially hanging off the side of the mountain as we’re driving to get around this big hole,” Jiménez recalls. Jiménez’s cousin had replied to her concern with a simple, “Yeah, they just don’t fix things here.”

What Jiménez had long known about the relationship between Puerto Rico and the U.S. became crystallized. For the first time, it truly sunk in — the legacy and real dangers American colonialism had left on the island. In that moment, she realized that everything she did going forward had to be in service of Puerto Rico.

Jiménez turned away from her undergraduate classics degree, earning a J.D. and a master’s degree in Latin American studies, then spending years as a practicing lawyer. She went on to earn a Ph.D. and a teaching position at UT Austin, specializing in law and race in US-Latin America, US-Caribbean relations.

And now, on the stage at Alphabet City, she shares pieces that span a variety of subjects, from familial violence to her travels in Greece. Her poems, read in a smooth voice that gracefully swells in the Word Cellar, give vivid images of racism, generational trauma, and colonialism. They work toward the promise she made to herself years ago — these poems share the stories and realities of Puerto Rico and colonialism.

But ultimately, Jiménez hoped for audience members to gain one thing from her reading: “I really think poetry, and reading poetry in particular, is about connection,” she says.

Jiménez’s story is one of many whose authors have come to City of Asylum for Latinx & Proud! Latinx art is Jiménez’s poetry. It’s the work of Juno Nascimento, a Lincoln Park high schooler whose voice trembles as he describes injustices he encounters in the news — it’s Carlos Andrés Gómez’s spoken word, confessing the fear of raising his black daughter in a racist world — it’s the Spanish songs and accordion-playing of José María Ochoa, a Youth Programs Coordinator for Pittsburgh’s Casa San José — it’s Analicia Sotelo’s poems, making the audience laugh and sigh as she depicts Greek mythology, Victorian romance, and enchiladas.

Artmaking is Community is Artmaking

All this to say that, perhaps, the Latinx label is not a genre, but a way to talk about identity and art. It doesn’t have requirements, like stereotypical motifs of Spanglish or immigration. It can include these or not. “There isn’t any one way to be — or write — Latinx,” says board member Malcolm Friend.

For many of these writers, their Latinx identity and commitment to their craft are inseparable. Jiménez says she has been writing poetry for as long as she can remember — and being Latinx, being Puerto Rican, is a crucial part of that. “I think that’s the way most of us see our artmarking,” she says. “That’s just a part of who we are, and how we move in the world.”

Though Karla Lamb grew up in a household that was proud of its biracial, bilingual, bicultural heritage, she says, “I think I’ve always just struggled because I didn’t necessarily have the language to say, ‘I am this.’”

She has recently come to embrace the word “Latinx,” using it for the series as well. While this word doesn’t exist in Latin American languages, many (though not all) Latin Americans have embraced it. Lamb has often said that she’s Latina, but Latinx feels like it allows for more fluidity. “I’m also Chicana, I’m also Hispanic, I’m also like all of these other things, and to me,” she says, “Latinx just kind of encompasses all of it.”

Lamb agrees. “I really believe we’re reclaiming this word, and this word is ours, because the other words can be problematic, right? … I think people are just becoming more conscious of what are the power words, and the consequences, too, of words.”

The “Proud!” part of the name is equally intentional. Lamb means for it to be engaging and confident. It shows that this series is a reclamation of an identity that has been poorly represented by outside communities, that has been marginalized in countless ways in the U.S.

Most importantly, the Latinx & Proud! series itself is meant to be a home for Latinx performers and community members. Before beginning her set in February, Analicia Sotelo says to the audience, “With each person who came up, I felt more and more like little layers and pieces of me were coming apart, and now I feel truly vulnerable.”

In the cozy, friendly space of the Word Cellar, everyone finds a sense of care and connection. Audience members thank writers for sharing their most candid, searing work — they encourage those nervous and new to the stage — tonight, they laugh at Sotelo’s jokes, and between poems, she asks the audience, “Is everyone alright? How is everyone doing?”

The journey towards community that Lamb began last summer has not ended, but has reached a kind of fruition. “I tapped into this reservoir and I’m just amazed,” she says. She not only found a family and community, but has found a cross-section between her professional work and her personal activism — and, she is now a part of something larger.

In her opening remarks in February, Lamb tells the audience how she began her search, asking herself, Donde esta mi gente? “Where is my community? Well,” she says, “I found it! And it’s here — with all of you.” 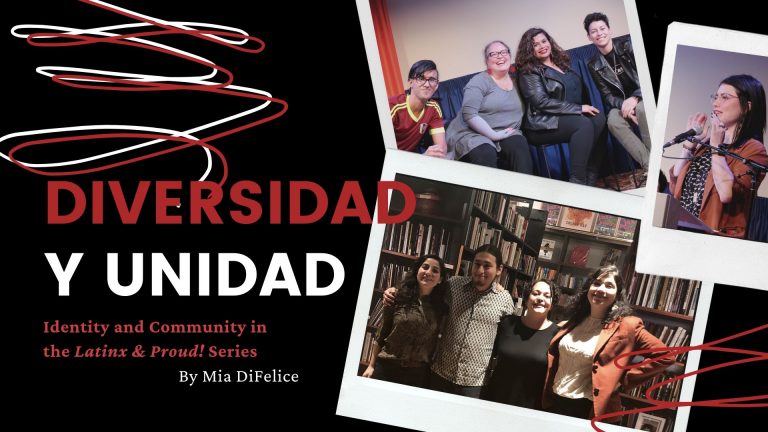