Osama Alomar settles into his home in Pittsburgh’s North Side and opens up Skype. In Quebec, Canada, more than 750 miles away, C.J. Collins sits at his desk, pulls a set of headphones over his ears, and does the same. For about eight hours a week, the pair work off their matching screens: Arabic on one side, English on the other.

Collins is the Arabic-to-English translator for Syrian poet, essayist, and short-story writer Osama Alomar, but if we’re being frank — which Collins and Alomar are with each other — they’re friends first.

“I’m like his annoying little brother or something, pestering him about word choice,” Collins chuckled.

In the twilight gaps between Collins’ day job as a librarian for St. Johnsbury Athenaeum in Vermont and Alomar’s daily writing and literary commitments, this back-and-forth dialogue is their weekly routine. Over the past 11 years, since Alomar moved from Syria to America in 2008, they’ve caught cross-country flights, worked side-by-side in Alomar’s Chicago taxi cab, sent each other countless emails, debated grammar over the phone, and most recently, have chatted for hours via Skype.

These persistent efforts have led to the collaboration of two volumes of translated works, Fullblood Arabian and The Teeth of the Comb & Other Stories. Currently, the duo is translating Alomar’s forthcoming novel about the Syrian war.

And it’s certainly not easy work.

Whether in pre-war Damascus with its intricate Islamic architecture and servings of sweet tea, at a dreary train station in Chicago, or while reading phrases out-loud over video call, Alomar and Collins have sustained a friendship rooted in the art and labor of translation.

Along the way they have navigated myriad challenges — dictatorship, financial hardship, and the vagaries of creating Arabic-to-English texts — all of which have only brought the friends closer together, strengthening their literary partnership.

“I have a baby in my arms,” Collins says, when I call him on the telephone late one April evening. But it’s no problem, he tells me. The baby is sleeping, and we’ll be able to chat for a bit. “Can you hear me OK?” he asks. There’s a certain warmth in Collins’ voice, making him sound genuinely concerned.

It’s easy to imagine Collins at his day job as a librarian at St. Johnsbury’s Athenaeum, chatting with visitors while sunlight gleams off book-lined wooden shelves and walnut floorboards.

Much has changed since the duo became friends in Damascus, including both Collins’ and Alomar’s occupations and countries of residence, the political situation in Syria, and most recently for Collins, fatherhood.

Alomar and Collins became acquainted following Collins’ 2006 Fulbright Fellowship in Syria, when a mutual friend invited Collins to a literary event at the home of Sahar Abu Harb, a feminist artist, activist, and writer who hosted monthly discussions on principled nonviolence.

“It was under the Assad dictatorship, so a lot of it was about nonviolence without specifically addressing how to overthrow a dictator,” Collins said.

If that sounds familiar, it’s because the theme appears in Alomar’s own writing, which indirectly critiques dictatorship in stories heavy with dark humor. His works follow in the Arabic literary tradition of al-qisa al-qasira jiddan, or “very short stories.” His tales are ripe with the personification of objects and animals to provide social and political commentary.

It’s tough for both Collins and Alomar to explain exactly what made them click as friends after that meeting. “I don’t know. It’s something spiritual,” Alomar said. “I don’t know how to explain it.”

When they met in Syria, Alomar told Collins that he was considering a move to America. It was a familiar sentiment repeated by many of Collins’ friends from Syria and one he knew not everyone could see through to the end. So in 2008, when Collins got a phone call from Alomar who had recently arrived to Chicago, it was a happy surprise.

“He was one of a number of Syrian friends who had really taken care of me while I was in Syria, and I wanted to do the same for him a little bit,” Collins said.

He invited Alomar to visit Amherst, Massachusetts, where he was living at the time. Alomar brought a copy of his then-latest book Fullblood Arabian, and Collins, wanting to give him a leg-up in America, began collaborating with Alomar to translate portions of the book.

At first, they published Alomar’s work in the literary magazine NOON  and garnered the interest of a few agents. They began to realize that their work held potential. Alomar returned to Chicago, and over the next year and a half, Collins flew back and forth from the Windy City to continue their translations.

Writing didn’t exactly pay the bills. Alomar picked up a job as a taxi driver, working long hours. Collins would hop into the front seat of the cab with a laptop and a dictionary in his lap as Alomar drove passengers around, the two debating word choice and verb tenses while weaving through the streets of suburban Chicago, often waiting at Rosemont Train Station for passengers.

“Watching this guy that I had known as a successful writer in Syria be reduced to driving the cab in the states was difficult,” Collins said. Passengers weren’t always the kindest, some baffled by the in-car translation.

And the physical act of driving for so long was also a hurdle. “Just sitting, it’s very hard on your body,” Collins said. Alomar drove the cab for almost eight years, for 10 to 12 hours a day, seven days a week.

“It was a hardship,” Alomar said. “I felt as if I lost my soul as a writer, especially the first year, at the very beginning of my first year driving.” However, the promise of translating and publishing his work, he said, provided a “ray of hope.”

In 2014, New Directions published Alomar’s English version of Fullblood Arabian as translated by Collins. Still working as a driver, Alomar tucked copies of his new book in the pocket behind the front seat, and curious passengers occasionally picked up a copy.

“Who is the author?” they would ask.

“Me,” Alomar would respond.

“What the hell?” Alomar remembered the passenger saying, laughing at the interactions. “Some of them, after they read it, they’d like it. ‘How can I get a copy?’ they’d ask.” He sold nearly 100 copies, just by driving his cab.

He recalled picking up a doctor from Denmark, who, during their drive to the airport, began leafing through the book.

“He started to Google me on his phone,” Alomar said. “He said, ‘You are famous, wow!’” The doctor went home and befriended Alomar on Facebook.

Alomar’s literary presence grew in the United States. In 2017, he became a writer-in-residence at City of Asylum, where he lives today. The same year, he and Collins released a second translated book, The Teeth of the Comb & Other Stories.

Nuts and bolts of translation

The Teeth of the Comb features more than 150 of Alomar’s “very short stories.” It’s a lot to manage, so Collins and Alomar number each story in a collection and translate in order. “Otherwise,” Alomar said, “it would be kind of a mess.”

Besides numbering stories, their approach has changed. Alomar no longer drives a cab, instead writing full-time in Pittsburgh. Collins lives in Canada with his wife and child (and commutes to Vermont for work). The two translate mostly over Skype. And while they used to communicate in Arabic, their conversations are increasingly in English as Alomar has grown more comfortable with the language.

Nowadays, they have a general routine: Alomar reads a few sentences of Arabic, after which Collins provides a quick, rough English translation. Afterwards, the two read through the translation together, discussing word choice. Finally, the they look solely at the English, making sure the translated text feels right.

It’s not fast. But it’s effective. “We’re looking at the same text repeatedly,” Collins said, “filtered through both of our understandings [and] ways of looking.”

And true to their brotherly relationship, Collins and Alomar aren’t afraid to slip into a little friendly quarreling to tell each other exactly what their different ways of looking entail.

“Osama and I are often talking very loudly back and forth to hash [it] out,” Collins said. “I guess we definitely argue a little bit, you know. Yeah, I guess. I guess, it requires a certain amount of honesty with each other.”

And the honesty is important, especially given the difficult nature of adapting Arabic texts for English audiences. Alomar and Collins have to make tough calls about how to narrate the short, satirical stories. One notable difference, Collins says, is the way written Arabic carries a formal tone different from spoken Arabic, a distinction which doesn’t exist between written and spoken English.

“We’ve tried different things over the years,” Collins said, including using word constructions that evoke a fairy-tale tone or an old language to emulate the experience of formal Arabic. Other times, they drop the sense of formality to avoid archaic, old-fashioned language.

Verb tenses can also get complicated. Arabic tends to move fluidly between present and past tense, while English demands a clear sense of tense, time, and sequence of events, which requires Collins and Alomar to test out various verb tenses.

And while personification, Alomar’s figurative language of choice, lends itself well to translation — “Chairs are chairs everywhere, in the west, in the east, north or south,” Alomar said — sometimes metaphors and concepts don’t translate across cultures.

Take, for instance, the translation of Alomar’s story “Knife” from his book The Teeth of the Comb:

He was born with a silver knife in his mouth and he was its first victim.

It’s a one sentence story that hinges on a metaphor that borrows from an idiom: “a silver knife in his mouth.” But the common idiom is different in Arabic than in English. In Arabic, the literal translation would have been written as a “golden knife” in the nameless character’s mouth, playing on the common Arabic saying of “fed with a golden spoon.” But in English, the equivalent expression would feature a silver spoon.

What may appear as simple one-word translation is in reality a great labor of communication and art. When we look behind the curtain, we see how simple word choice is a decision that can take Collins and Alomar great time and effort to unspool — a craft they’ve spent years honing.

When Alomar says that living in America has changed his dreams, it’s not a metaphor.

“I started to see some dreams in English,” Alomar said. “It’s a sign.” Sometimes, around his house, he realizes he’s speaking in English to himself. And, while working on his upcoming book on the Syrian war, every now and again Alomar finds himself writing in English.

These moments of accidental English make him smile. “Because I want that,” he said. “This is my future, to write in English, to publish in English.”

One day, he said, he may want to write a book in English and translate it into Arabic.

Regardless of how the work of translation for Alomar and Collins has changed over the years or may evolve in the future, the hours upon hours they’ve spent together, Collins says, are key to their close friendship.

“Working together to create a text … that cuts through a lot of the bullshit,” Collins said. “To have a good working relationship, you have to be able to speak honestly, and I think we’ve had a lot of fun over the years doing these, doing this translation.” 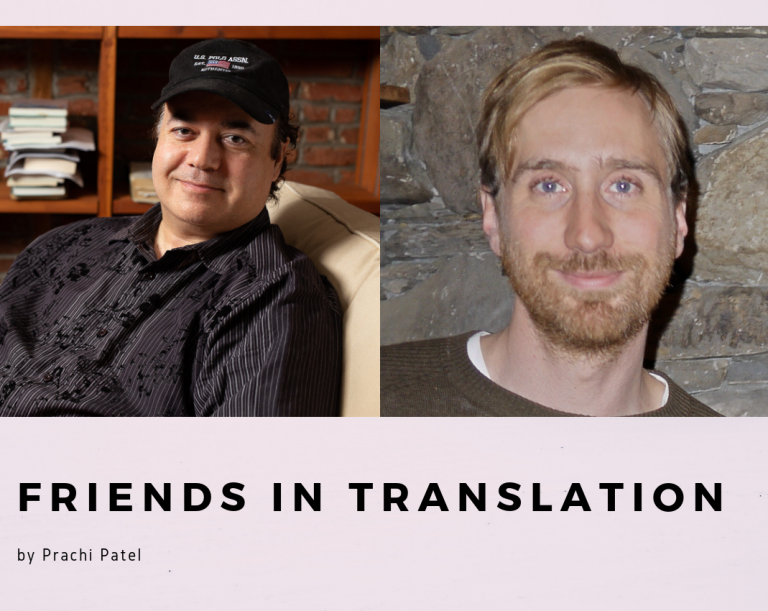