Mai Khoi is a songwriter, pop star, and activist who uses her platform to fight against censorship in her home country Vietnam. Through music, she explains both her love and frustration for Vietnam and why she uses her voice for change rather than fame. Known as the “Lady Gaga of Vietnam,” Mai Khoi not only employs her uninhibited musical talents on stage, but she involves herself in the political arena, having run in the National Assembly elections in Vietnam in 2016.

Last Spring, Sampsonia Way Magazine had the pleasure to sit down with Mai Khoi over Zoom to talk about her activism in Vietnam and her time as an Artist Protection Fund fellow in residence at the University Pittsburgh. We spoke to her about her most recent work, her autobiographical rock opera titled Bad Activist.

It’s a multi-genre musical in which Mai Khoi narrates her journey from pop stardom to runaway dissident, revealing how her political voice was awakened — only to be silenced by the Vietnamese government in her fight for democracy. She previewed her performance for the University of Pittsburgh over Zoom last Spring, which you can still watch here.

In her show, she chronicles the moments that have defined her political awakening, from seeing her father taken away to re-education camps to her own struggle to overcome the misogyny of the Vietnamese pop machine. Ultimately, she delivers her message: everyone and anyone who cares for freedom of expression and democracy must become an activist in their own way and on their own terms. Even you.

Mai Khoi’s courage and activism have gained media attention in The Intercept, as well as several media outlets in Pittsburgh where she currently resides as a resident at City of Asylum.

The Art of Song

The performance and storytelling in Bad Activist is truly so powerful. Can you elaborate on the process of creating it and how you got started? How long have you been working on it?

I had the first idea to make Bad Activist a few years ago. I was invited to share my story about being censored at a conference and received a lot of good feedback. Since then, I had an idea — why don’t I combine the story and my music performance together? We are a small team, but we produced Bad Activist very quickly. And this is actually just the demo — we want to make it into a feature-length movie/performance. That project is still going on, and there will be another version of Bad Activist with a full band and richer music, so this is just the beginning. In the next stage, to develop the project, we will have more musicians, more instruments, and are calling for more support.

What went into the storytelling process?  Because writing lyrics, no matter what, can be really difficult — and your show covers so much ground!

Most of the songs in Bad Activist I wrote a few years ago. Around 2016 and 2017. At that time, I had just started to get involved in activism. The lyrics came out fast because I was just expressing my feelings. I always fall into deep emotions when I sing songs from that time because it’s the truth. I’m telling the truth. And it’s so human.

In your performance, you describe how your dad was sent into the re-education camp for his bell-bottom jeans. And we couldn’t help but notice how you yourself have a stunning sense of style in your show. It made us curious. Does style or the way that you present yourself to the world play purposefully into your activism?

When I was a pop star in Vietnam, censorship was at the very core of society there. It was very conservative. But I always fought it because I wanted to express myself. I knew society had  a limit on how I dressed, sang, or performed in order to make them agree with and like me, but I didn’t agree with that. For a long time, I was getting bored. The anger inside me was building up, and I decided to make a big change. Now — in how I dress today —  I’m not dressing just for beauty. When I don’t wear a bra, it’s not to show off my boobs or my body, but because that is the sign of freedom. Women should have the freedom to wear whatever they want.

Do you think that by teaching you how to play the piano and the guitar, your father gave you the tools to become an activist?

You mentioned earlier how your mother doesn’t necessarily love some of the more guttural loud singing that you do in the show. We were wondering if you could talk a bit more about the influence of your parents and how they’ve helped your singing career and your activist career?

My father taught me all of the music. He never agreed when someone asked him to do something  he didn’t believe in. Never. I think I have that seed from him.  But my mother is very behaved, very peaceful and just wants to live in peace. She likes romantic things and songs, and when I was growing up, I liked romantic songs as well. She’s a literature teacher, so she helped to teach me literature, which is why I can write lyrics.

My mother doesn’t like how I sing on certain parts of Bad Activist because it’s so weird for people who just like to listen to easy music. But, my voice expresses the emotions inside me at that time when things happened. But, I also like another side of beauty. To me, it’s not ugly at all when you are screaming. It’s not a common sound, but it’s beautiful.

In Bad Activist, the music came along with the story, where we have many different emotions and different transformations, so many things happened. I don’t think only one style of music can express all of the feelings and the emotions we have. For example, in my show, I make the sounds you hear when in jail, in the re-education camp. I make the sounds like like I do to show what it’s like when we are in prison and we have to stand or are tortured, to show we have to eat the old rice where flies are flying around, and we have to feel the cold in the prison. Pop music cannot express that feeling.

On Activism: Hope in a Hopeless Place

In Bad Activist, you mentioned that the first hit song was about your love for Vietnam. Now, a lot of your songs are very critical of Vietnam. I was wondering, what is the tension between these two ideas? What is it like to love a country that you’re so frustrated with?

Fifteen years ago, I wrote the song called “Vietnam” when I was still a pop star. I was on an airplane, and when the plane took off and I looked down, I saw Vietnam and thought it looked very beautiful. I have a very special connection with the country because of the beautiful landscape. I wrote that song with my real raw emotions. To the country.

Of course, 15 years ago, I was more naïve than now. At that time, I didn’t even know what freedom of expression or activism was. I had a lot of hope for the country. Now, I have seen the government damage the country and all of the beautiful places with corruption and construction. They don’t really care for Vietnam.

I know, oh, if I wrote a song about how much I love Vietnam, I will have the prize — people love that kind of song. They love patriotic songs, and I would have the support of the government. So, I wrote that song and yes, it won “Song of the Year,”the biggest award for a musician in Vietnam, and it made me famous. But 10 years later I kept seeing injustice and that the government didn’t change, so how could I keep that hope anymore? I had to write new songs and criticize what they’ve done wrong for the country. I can’t keep myself silent.

I wrote a song about the beauty of the woman’s body, but that song was censored. Before we could release an album or organize a performance, we had to ask permission from the government and its censor system. If they don’t give you permission, you aren’t allowed to release the album or perform. So I couldn’t release that song. Some of the topics that are sensitive with the censors are politics, human rights, freedom, or women’s image. Even the word “freedom” is censored in certain songs and words like “communist” are censored when you write a book. The censor can even change your song, depending on their individual ideas, not even based on any rules. But in Vietnam, we have to censor ourselves first before it gets to the censor.

We were interested in how you balance your hope for Vietnam and your criticism of Vietnam policy. Would you say that your criticism of the government is effective because of the hope you have for a better Vietnam? And does that hope look different now that you’ve left Vietnam?

Now, I am not full of hope like I was before. But I still have to hope in the hopeless place of Vietnam because if you don’t hope, you will not do anything. And that is worse. The more you have privileges, the more you should recognize your responsibility within your society. Problems are everywhere, not just in Vietnam. We should together create greater solidarity to build big movements around the world.

Other pop stars and celebrities in Vietnam do some charity shows to help poor people, but they have yet to stand up for human rights or for political participation. It’s sad. They are scared of the government taking their career.

Why do you think you had the courage to stand up for what was right when other folks haven’t?

I couldn’t stand the censorship system anymore. I was very angry every time they censored my song and I felt so insulted. As an artist, when your songs are censored, it’s like they killed your son — it’s hurtful and so insulting. I couldn’t stand it, so I decided to stand up.

In your show, when you say we all need to become activists, we — here at the magazine — all agreed! But what do you think that means for us?

Becoming activists means you have to put deeper care into your society. When you become an activist, you participate in stronger actions, like building movements, or encouraging the people around you, and taking specific action to do something for the issues that you care about.

If you want to change, you have to feel that we are in an urgent moment, and you have to do something quickly. 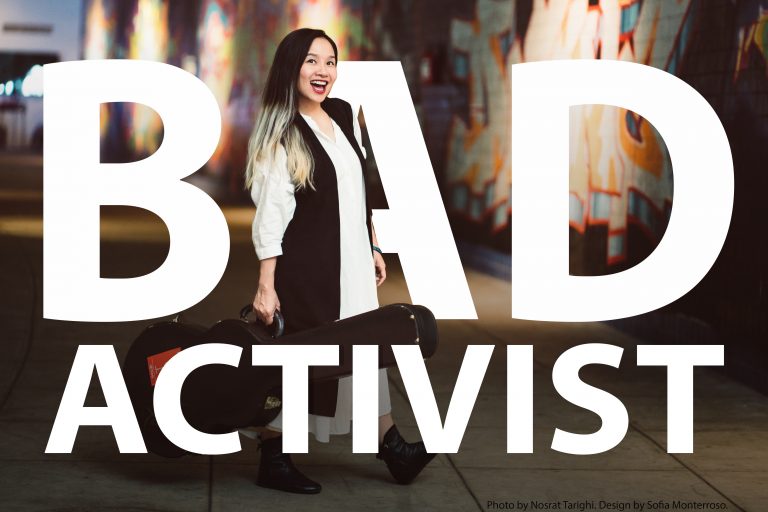