Fatemeh Ekhtesari is an Iranian poet, artist, and human rights activist who was forced to flee Iran after she was charged with “insulting sanctities” in her poetry and sentenced to 11 1/2 years in prison and 99 lashes. Now in Lillehammer, Norway, Ekhtesari is working on a collection of personal and critical poems about the experience of living in Iran and leaving Iran, exploring issues of sexuality, religion, and gender — and the struggle for women’s rights.

Her poems capture her experiences of suppression, revealing imagery from the Iranian court system and prison system and evoking scenes from her flight for safety and freedom, which ultimately brought her to Lillehammer for an ICORN residency in 2017. Ekhtesari’s work has grabbed the attention of numerous media outlets worldwide. Her renowned abilities as a writer and activist don’t only reside in her written work, but also in her profound social media presence, with more than 125,000 followers on Instagram.

Earlier this March, Sampsonia Way met with Ekhtesari over Zoom to talk about her artistic process and her experience as a woman in Iran. Despite her own hardships being an Iranian woman and dealing with the dictatorial government, Ekhtesari underlines how her work is that of her own sagacious creativity — and not a political manifesto.

Your journey is very fascinating. What was it like fleeing from Iran and starting over in Norway?

First, I have to say that I didn’t choose to leave Iran. Exile was not an alternative. For me, I didn’t immigrate, I escaped. While I was in Iran, my friends helped me to apply for ICORN, an organization that helps artists in danger and tries to get them to a safe place. As I waited for a response from ICORN, I left Iran illegally and went to Turkey to stay alive and continue as a writer. It is a strange story, and it takes time to tell, but eventually after some time in Turkey, I could come to Norway as a guest writer for two years. Now I am here in Lillehammer as a refugee and freelance writer.

Reading through your poetry, I’m struck by how powerful the imagery is. I was in awe of how amazing they are. Are these poems based on your experience in Iran — are you documenting your experience?

For writing poems, I partially use my personal experience: I was able to write about love, imprisonment, and exile based on my experiences. For another part, I use the experiences of those around me. I listen to their conversations, memories, and get ideas for my writing from those events. The final part is my imagination: things that do not actually exist, but I create them. Most of my poems are a combination of these three.

Can we talk a little bit about your book in-progress? What is it going to be about and your process for that?

The book is a bilingual poetry collection in Persian and Norwegian. All the poems are new, and aren’t published anywhere. And the purpose is mostly to address the second generation of immigrants, to reach those kids who come to Norway when they are eight or nine years old or are born in Norway to Iranian parents and how they might have lost the original culture and the Persian language. They know more about Norwegian culture, but they are curious about Iran. They learn both languages, but they don’t know about Iran’s culture and situation. Their parents can teach them, but they want to learn the literature as well.

But, it’s also mostly about women, and women’s issues related to their life, and mostly women in the Middle East because they have a bit different experience than women in Europe or other countries.

Can you elaborate on the experience of women in the Middle East?

Iran and other countries in the Middle East have dictatorial governments. The women experience difficulties different from women in the rest of the world that prevents them from participating in artistic gatherings or other parts of society. And it’s only because of one “crime.” Being a woman.

It’s part of the government’s repression of women in Iran. For example, there are anti-women laws that exist and laws that do not protect women where necessary, like the obligatory hijab. Or, if a husband doesn’t want to, he can prevent his woman from working, studying, or leaving the country. That is, as a woman, you are a man’s property and he can decide for you.

But it is also part of this oppression and humiliation that is inflicted on women by the family — a family that decides for a woman what to wear, how long to study, whether she has a job or not, who to be friends with, and at what age to get married.

These restrictions and pressures are much more apparent in traditional families; they control women more. To go to a simple poetry session, you have to satisfy the whole family. Women are always considered the second sex in society. It’s not just governmental issues, but also from the tradition that we grew up in. As a woman, you have different experiences than the men in your society. Women cannot connect with a man or even shake hands with the opposite sex. I was sentenced to 99 lashes just for shaking hands with the opposite sex.

It’s the same in the artistic atmosphere — you are the second sex, you become censored, you are harrassed, and are the subject of hate speech because of your gender.

In another instance, when I sent my book to get permission to be published, they censored some of my words. As a woman, if I imagine or write about a romantic connection between two people, it’s censored. I try to write about this issue in my poems, but not as a direct message. I don’t like that. In these poems, I just try to set a situation and tell a story without any judgment. For me, judgment is for the audience. They can get some meaning out of my work and they can put themselves in the situations and think about what’s right and wrong.

Is it very difficult to get your work across because of language barriers? What is your translation process?

The basic thing that I missed since being in exile is language. I have to use English because of course, as a writer, and I have to use Norwegian to communicate with the people of my new country. I have published one bilingual poetry collection in Norwegian and Persian. The translation was a challenge because many of my poems referred to the cultural and historical issues of my country, and I wanted to be certain that they would not be damaged by the translation. So, I had to remove many poems from the book. I know some of my poems are untranslatable.

I’m struggling especially with Persian and how Persian language doesn’t have gender and how the pronouns do not have differences in gender. In English and in our region of Norway, we have “she” and “he” that refer to two different kinds of people. But in Iran when you use pronouns, they don’t have gender, so for translating I had to choose one of these two. When I speak about humans, however, I do not just think about a man or a woman, I have a picture that refers to the whole world, not a special gender, so it makes a problem for me and the translator. But I cannot say, “No, I don’t want to translate my words” because I want to communicate with the world. I have to just convince myself to pick.

How do you feel about Iran right now? What are your emotions towards the country? Is it a place you would still feel home?

It’s strange that I’m living in Norway, but in my mind, I’m living in Iran. You cannot separate me from Iran.  It’s all in my mind: my family, my friends, the restaurants, all the memories, all the poetry sessions that I had and could have, and all the good things. And the bad things are not with me now. Here, I have freedom and safety and security. I begin my day and fall asleep with the news about Iran and I miss my country, really, even now that Iran has a bad political situation.

I’m also aware that if I was in Iran, I would have to be in prison. Even if I didn’t have my sentence — when  I was sentenced to 11 1/2 years in prison and 99 lashes — if those things didn’t happen and I was in Iran right now, I would be in danger and they could arrest me. But I still have this feeling of nostalgia. 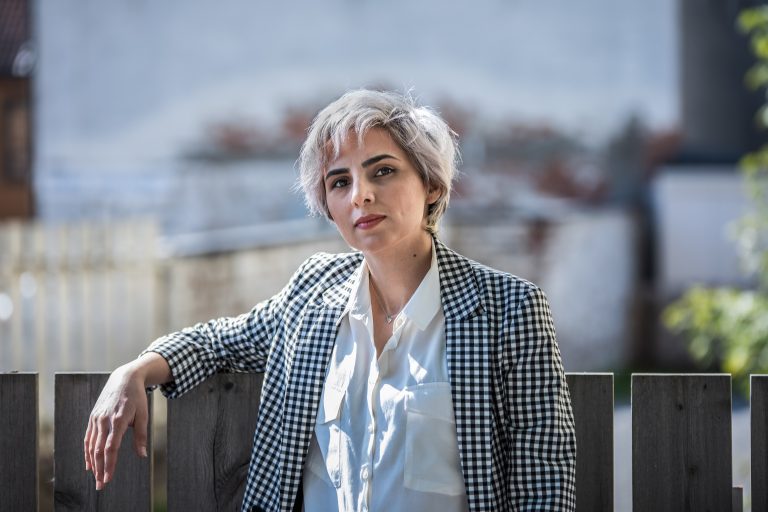