Memories in Exile: Khet Mar and Her Sons on Burmese Culture and Adapting to the West
Written by Jennifer Nguyen
Published December 4, 2019

Khet Mar is a Burmese activist, journalist, and writer. She is the author of Night Birds and Other Stories and numerous poems and essays. Mar was a fellow for the University of Iowa’s International Writing Program in 2007 and Hong Kong Baptist University’s International Writers’ Workshop in 2014. Mar, her ex-husband, and her two sons moved to Pittsburgh in 2009 for her two-year residency and now reside in Maryland. Today, she is a radio journalist for Radio Free Asia in Washington, D.C. and reports on present-day issues in Burma. In early October, she returned to City of Asylum for its Exiled Voices: Resident Writer Reunion. Before the event, Khet Mar and her two sons, Wa, 22, and Linn, 18, sat down with Sampsonia Way to talk about Burmese culture and the hardships of living in diaspora.

What aspect of Burmese culture do you miss most?

Khet: I miss how Burmese culture encourages the whole family to live together. It’s common for grandparents, parents, and kids to all be in the same house. In arrangements like this, elderly people don’t feel alone and instead feel secure. Kids have lots of constant love from their grandparents and parents, too.

I grew up in a house with my grandmother, mother, uncle, younger sister and younger brother. We would sit in the living room, listen to the radio, and talk every night. Before everyone went to bed, the kids would gather in our grandmother’s bed where she would tell us fairy tales. I miss this time in my life the most. Although I now live with my sons, I miss this culture very much, especially when I feel alone in America and do not see them for days.

Since your years in exile, what memories of Burma do you find yourself wishing you could experience again?

The sun. Sunlight. Sunshine. And the warmth, the heat. … In Burma, we reach 110 degrees Fahrenheit in the summer and 70 or 80 in the winter. Especially in Pittsburgh, we don’t have proper sunshine in the winter. I remember one time, I was really depressed in Pittsburgh. I didn’t know why. And one day, I woke up late because I always wrote at night, and I saw the sunlight outside. I felt really happy. And I realized that the sunshine can make me happy, and I miss the sunshine in my country.

When you first arrived to City of Asylum from Burma, what surprised you the most?

Khet: People, especially those at City of Asylum! When I got an e-mail that said City of Asylum accepted me as a writer-in-residence for its two year program, I told my mother that I was going to America with my family.

She asked me, “Why? Do they know you? Have you seen them?”

So when I arrived, I heard my mother’s questions in my head a lot. The staff had never seen us in-person, but they decided to bring me to America for two years with my ex-husband and sons. That was really amazing for me. I couldn’t believe it. Because back in Burma, people don’t know how to value writers. Although we write a lot of pieces, they are just for us, for me.

In America, in Pittsburgh, I can see that writers are valued. City of Asylum encourages writers-in-residence to write new pieces for their home countries. Through these pieces, I hope to show how people in America value their writers and how literature is important for a society, for the people in a particular country, for education and upliftment.

Do pieces of literature in Burma still go through censorship and government review before they’re released?

Khet: No, Burma hasn’t censored work since 2015, but publishing is still difficult. Authors have to be careful of a new law. Section 66(d) of Burma’s Telecommunications Law allows authorities to file against authors if they don’t like their books. In a way, this is censorship. Traditionally, the term “censorship” applies to what is done to works before they are published.

Your job at Radio Free Asia consists almost solely of journalism. However, when you first came to City of Asylum, you mainly wrote short stories and essays. Do you still write creative works?

Khet: Yes, but not as much as I did in Pittsburgh. My job as a radio journalist at Radio Free Asia has a very difficult work schedule, which I’ve had for almost eight years. Although my co-workers and I work in Washington, D.C., we report our news to audiences in Burma. This means I work from 3 a.m. to 12 p.m. I used to write at night, but now I prepare for bed at around 7 p.m. or 8 p.m. Generally, I have no time to write, so I don’t write creatively as often as before.

How do you keep Burmese culture alive when raising your sons in America, on the opposite side of the world?

Khet: I tell them about Burmese culture often. I ask them to read and watch Burmese news and explain current events to them if they want to know more or don’t understand them very well. I also bring them to traditional Burmese festivals at Buddhist monasteries. A constant presence of culture appears through food. I cook traditional Burmese food almost every day. My sons love some dishes, such as gram pea and pork rib soup. My late mother liked this dish a lot too, so I cooked it often when I was in Burma. Although Burmese culture has a presence in their lives, I don’t force this upon them. I know they are going to try to follow and value it when they truly recognize that they are Burmese.

Wa and Linn, how do you each keep Burmese culture alive as Burmese diaspora in America?

Wa: There wasn’t a culture shock for us when we first came here because we were so young, curious, and accepting to everything. Everything was new and exciting. I’m still struggling with culture right now. I realized that there isn’t really one type of culture in America. If someone’s culture isn’t instilled in them, it’s hard to feel comfortable about culture in general, especially as a minority. Sure, there is some sort of American culture, but it’s not tangible and is very hard to grasp.

Since we were very young when we came from Burma, I would say Linn and I don’t really conform to most of Burmese culture. Currently, it’s hard to know which culture — Burmese or American — to hold onto. In Maryland, there is a lot of Hispanic culture. Seeing how these minorities preserve their home culture and what aspects they keep alive is hard. It makes me ask myself, “How can I do the same with Burmese culture?”

The importance of culture is a recent realization I had. I know I’m culturally deprived. Because we went through citizenship when arriving to America and weren’t able to return to Burma during the process, I haven’t been back since I came in 2009. I want to go back as soon as possible, so I can re-immerse myself in all that Burma has and find out where I actually come from.

The main thing that Linn and I probably preserve is our language. We try to speak Burmese at home. Besides language, religion is the next big component of Burmese culture we preserve. We were raised Buddhist, and I was ordained as a monk last year.

Linn: For me, I was younger when we arrived to America. I was more susceptible to American culture, and it was easier for me to get accustomed to it. I didn’t really have the Burmese culture that I needed to shape me when I was growing up. Not living in my home country and growing older in America made me realize that culture is important.

It is hard to be from one culture and then be immersed into a whole different culture. People have to find where they fit in and embrace who they are. Generational gaps are difficult too, like the cultural differences between parents and their children if they grew up in different countries.

What do you remember from Burma?

Linn: Honestly, it’s hard to remember memories in detail because they’re like blurred pictures. I can only pick out certain details because I was young. I remember a couple of friends, but I don’t even remember some of my family members’ names. If my mom showed me a picture of one of them, I’d say, “Who is this person?” I feel bad for not remembering, but I can’t do much about it.

I remember having actual fun as a kid. Because I was so young in Burma, I didn’t have much to worry about. I would bike for hours and look for sugar fruits — sweet fruits that grow on trees. Everyone did that. Everyone was outside playing around and roaming.

Wa: For me, the most memorable thing was playing around as a kid. Otherwise, it’s hard for me to remember a lot. I don’t remember any of my friends’ names or what they looked like. I remember our family members that we spent the most time with, like our grandparents, aunts, and uncles.

We roamed around the city a lot. I was probably 9 or 10 when I took the bus around the city to go to school. We went to school about 30 minutes away from home. We had a lot of freedom as kids. I remember a lot of the roads in the cities, but I’m sure they’re all different now. 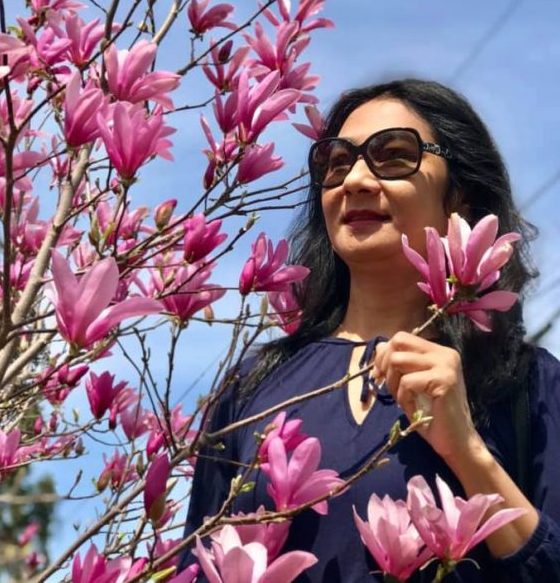