In September of this year, Nigerian writer, Emmanuel Iduma performed at City of Asylum’s annual Jazz Poetry Festival. He read alongside music from Portuguese vocalist-composer, Sara Serpa, and like his most recent book A Stranger’s Pose, their performance blended genres to engage themes of “movement, home, grief, absence and desire.” In early November, Iduma kindly made time for a conversation with Sampsonia Way to chat about form, belonging, and the importance of particularities.

Iduma is also the author of The Sound of Things to Come (originally published in 2012 in Nigeria as Farad). Additionally, his work has appeared in various magazines and journals, including ARTNews, Art in America, BOMB, Chimurenga, Brooklyn Rail, Guernica, and British Journal of Photography. He is currently a faculty member at the School of Visual Arts, where he obtained an MFA in Art Criticism and Writing.

A Stranger’s Pose — I’m sure you get this a lot — is incredibly innovative. It’s part novel, part poetry and includes travelogue, memoir, and photography. Where did you get the courage to create something that transcends genre?

I like that you use that word, courage. It is courageous to work in what I perceive is a “mongrel form.” The courage is in the fact that one has to be audacious to believe that the many forms being used in the book can culminate in a cohesive reading experience.

From early on in my writing life, I was drawn towards more than one direction at the same time. I originally trained as a lawyer. I had learned how to make legal arguments and propositions. I was taught jurisprudence, evidence, the burden of proof, and all of that. Going into art criticism, for me, was always in connection with the need to make a case for something. To prove beyond a reasonable doubt. To show that an idea has been deeply considered and that one can draw both from the facts of the experience and on discourse to present a compelling argument or narrative.

While I was in university and law school, I wrote fiction for most of the time. And at the end of a five-to-six-year period of studying law, I had written a novel. In a sense, the mélange of forms appealed to me from the start. And, I never wanted to create hierarchies, as much as I wanted to make distinctions between forms.

You mentioned the photographs, and you used the language of fragments earlier. I definitely experienced those fragmented images as a reader. I’m curious why you crafted the book in a way that doesn’t necessarily have a perceivable linear direction?

I was working with two notions and both are drawn from quotes from two different books. The first is a sentence from John Berger’s And Our Faces, My Heart, Brief as Photos: “Without home, everything is fragmentation.” And the other is from a book that was translated from Arabic by the American writer, Paul Bowles. The title of the book is A Life Full of Holes. And the sentence from which that title comes is, “Even a life full of holes, a life of nothing but waiting, is better than no life at all.”

So, I was thinking of the idea of homelessness in connection to fragments and holes, even gaps. One is constantly being dispatched from more than one direction. I felt that I couldn’t write about travel, migration, homelessness, estrangement and the feeling of being a stranger in a chronological fashion.

The Mundane and the Majestic

The images you depict zoom in on the beauty of the mundane, whereas other travel literature might focus more on the majestic. How would you advise a writer, or perhaps just a fellow human, to exist in the tension between the ordinary and the grand?

In the years before writing the book, I traveled with Invisible Borders, a group that emphasized the notion of the everyday. We didn’t necessarily have a grand plan of what we should do or say in a place. We could see what happened when we connected a brief and fleeting presence to a place at a given moment. I was, in a sense, responding to the momentary, the fleeting. To pay attention to that, rather than something grand and majestic, what might seem ordinarily mundane, becomes significant.

I’ve just returned from doing a few talks where people acknowledged that, while reading the book, they would come to a passage and wonder, “What’s the point of this?” They found that curious, not necessarily problematic. But I said, that’s the point. We have been acculturated to think about the African continent as one in which there is always a theme, a grand political narrative. A conflict that has to be resolved. A tragedy or a misfortune that has to be repeated, and on and on like that. Perhaps, one can think about parts of the African continent in a way that simply responds to how strangers encounter each other. And, you know, in my approach, I was very interested in what happened when I focused exclusively or for the most part on the mundane.

The Atlantic featured a review of the book that explains what you’re describing, that you are breaking down the temptation for sweeping narratives about Africa or what it means to be African. Which is quite powerful and necessary! And yet, I also feel a sense of commonality in your writing, that you are also asking what it means to be human. How do you balance drawing out the particular with that which unifies humanity?

There’s the idea that a grain of sand can contain the entire world. People often assume that by focusing on the particularity of an everyday moment or a simple encounter, one loses the opportunity for universal speculation. So, I’m glad to hear that this wasn’t lost in my writing.

Almost more important than thinking about the universal, was homing in on what it means to be an “other.” The idea of being an other or a foreigner is something that everyone understands on some level. It’s called A Stranger’s Pose because we all understand how strangers compose themselves. Toni Morrison writes in The Origin of Others that the stranger is not random or foreign — when we call someone a stranger, we are doing so because we are terrified of those things that constitute their strangeness. So, when we look at someone and think “this person is black,” implying some kind of barbarism, it’s especially because we are terrified of barbarism in ourselves.

And so, we are enchanted with scapegoating. We are always looking for individuals, groups — sometimes whole nations — to become the scapegoat for that which we fear in ourselves.

I saw an interview where you spoke about the dangers of communication barriers. But you used a distinct phrase. You called it “a promising danger,”which just kind of struck me. Could you speak to that a little bit?

I’m interested in romanticizing certain notions. I’m looking for what I could call the sublime in any idea. So when I think about my language barriers — which were real and frustrating — I would reach immediately to how that difficulty could be promising.

The struggle was real. I spent time in Morocco, and my French is not good. My Arabic is certainly not good. I was staying in a neighborhood where I could find a good number of people who understood only a word or a sentence in English. There were days when I didn’t have a translator or days when no one could help me translate a long interview or a conversation. And I would take very long walks and do so with the knowledge that I couldn’t communicate.

It’s almost like losing the sense of sight or hearing — another sense becomes pronounced. For me, it was a sense of keen observation. The primal instinct of, “What am I? What is happening around me?” This was the promise. I mean, I don’t want to generalize. In my experience, it wasn’t always promising. But it was clear that something else opens up after the loss of language.

You’re a Nigerian man now living in America. How do you experience being a stranger here?

I’ve been living in America for nearly seven years. My sense of a world outside Nigeria began with New York. Of course, there are worlds within Nigeria, but in the sense of a transnational world, it began for me during my time in America. And since I didn’t have a date of return to Nigeria, the tension of that fact produces many questions. I’m always figuring out: How much do I now belong to this place? What are the terms of my belonging?

But I am back and forth between two worlds, so to speak. I don’t feel completely devoted to an American life. That has given me a certain freedom. And while I respond to the fact of being Nigerian in America, what has remained of primary importance for me is to use all the opportunities I have in America to respond to my sense of what Nigeria means to me.

I was going to ask about this idea of belonging. And I think you partially just answered that. But I’m curious. In all of the traveling that you do, how do you maintain and pursue a sense of belonging?

I believe that my sense of belonging will evolve. For instance, if you start a family, it changes how you feel you belong to the world. And I am not interested in making it simply theoretical. I’m very interested in answering the question of home and belonging in a practical and concrete and helpful way. And so, especially in my writing, the idea of responding to historical moments in Nigeria is a way of grounding myself. Since my thoughts are directed to those kinds of moments, I feel that I belong to Nigeria in a different way than I do to America. Writing A Stranger’s Pose was an attempt to locate my belonging. 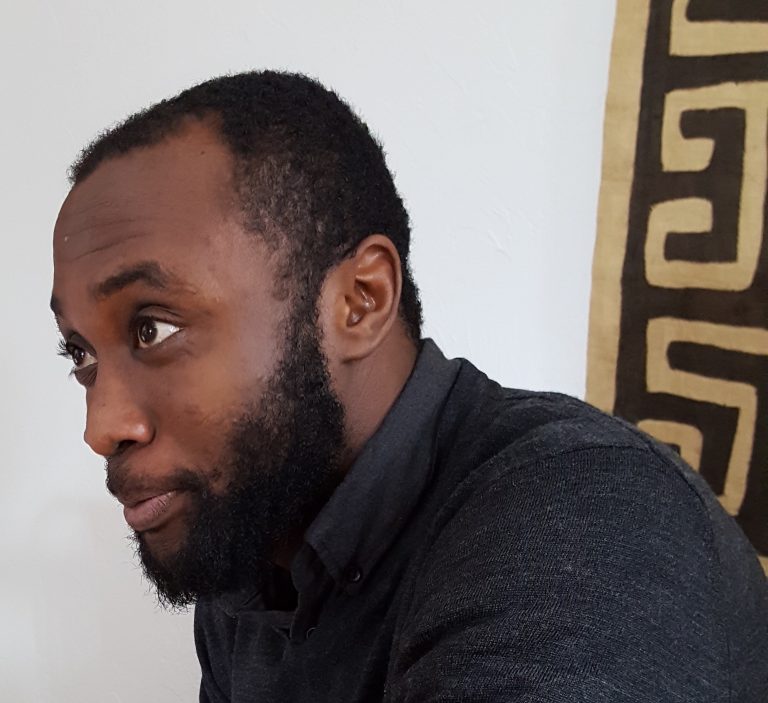